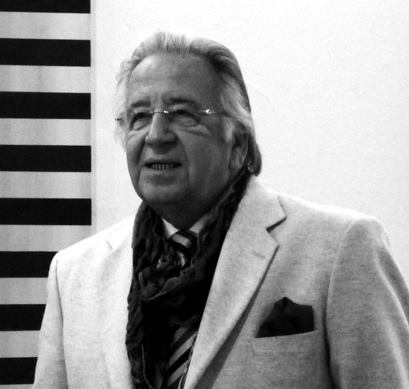 Cetin Erokay was born in İzmir, Turkey . He was graduated and made his masters degree at Izmir Ege University Economy and Commerce Faculty.

Prof. Dr.Murside İçmeli’s and Mr. Mahmut Dinçer’s drawing and painting lessons was the main reason he started loving art. He improved his artistic work and technique by the critics of his outstanding contemporary artist friends and in paralel with his own studies.. From 1970 to 2005, he lectured Public Relations and Advertisement classes in Ege Univercity Journalism an Public Relations Faculty.

Mr. Erokay took a key role in the establishment of SELCUK YASAR MUSEUM OF PAINTINGS –İzmir/Turkey.

One of Mr. Erokay’s painting was used as a poster at the ‘’IV International Izmir Movie Festival’’ in 1992.

In 1998 one of his graphic designs, became one of the finalists of the “International New York Festival” and his work was printed in the book entitled “The Worlds Best Works .

He has also held many solo exhibitions and participated in group exhibition. Çetin Erokay paintings have been exhibited at Viyana, Roma, Lile, Beijing, Newyork, Siauliu ,Tibilisi and Vila Viçosa -Portugal. His artworks took place in various repuable art collections in Turkey and abroad.

He is member of Euro Asian Worldwide organisation located at Viyana also he is the Chairperson of EAWW in Turkey. In year 2013 he was ınvıted to Kuwait as Turkish Guest of Honor for “ Contemporary Art For Arabic Countries Confrrance“ which held by Kuwait Art Associations. He was member of Jury staf of Anima Mundi Festivale in 2015 and he had exhibitions with other Jury members both in Lithuania and Georgia. In 2017 he become Honorary Member of IAF ANIMA MUNDI. In April 2018 he had a solo Show in Kaunas “The Shadows of Time.”.

He continues his art endovour in his own atelier at İzmir-Turkey.